Caption Literature
A Very Rare Scottish Turned and Polished Black Stone Punch Bowl . Inscribed around the rim : ‘I was made and of S? Katrens Ston. Fill me Full & Drink me out , in Inveraro’ ( top line ) and : ‘& Fill me full again ? William Broun ? Margeret Dobbie in Bo:Ness 1754’ ( bottom line )
Circa 1754
Size : 10 cm high , 23 cm dia. – 4 ins high , 9 ins dia.
The shape of this unusual Scottish bowl is very similar to that of the delft pottery bowls of the mid 18 th century , the majority of which were probably intended for the making of punch . A fact borne out by the many and various inscriptions to do with drink found on them . The earliest date found on a delft bowl is 1681 and the latest 1779 . This stone example is dated 1754 and was probably made to commemorate the marriage of William Broun ( Brown ? ) and Margeret Dobbie .
Turned from 'S? Katren's Stone' it is fashioned from the finest and most durable kind of slate found in Scotland , that was used for the manufacture of tables and chimney pieces . It is sometimes known as 'Dachschiefer' slate .
'Inveraro' is most probably the Georgian town of Inveraray from which across the waters of Loch Fyne , lies the tiny village of St Catherine's . The third Duke of Argyll , head of the powerful Cambell clan rebuilt Inveraray in 1745 as a classic example of an 18 th century planned town establishing it as a legal and commercial centre for the region , as well as distancing the towns inhabitants from his impressive and newly rebuilt castle . 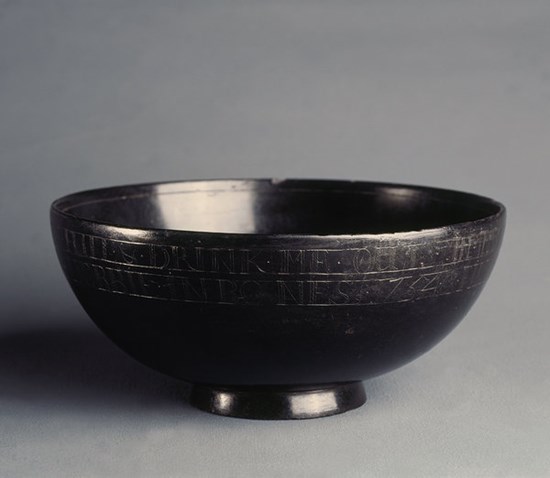