Caption Literature
An Australian Aboriginal Bark Painting entitled ‘The Snake Dance’ by Lipunja of Millingimbi , central north coast of Arnhem Land . Stringy eucalyptus bark and natural pigments
Circa 1920’s – 1930’s
Size : 58.5 cm high , 35 cm wide – 23 ins high , 13¾ ins wide
‘The Land Before Time â€¦’ The Aborigines believe that , even before there was any life , the earth had always existed as a flat , featureless plain , extending on all sides to the edge of the Universe . At some ill defined period known as the ‘Dream Time’ , giant semi-human beings , resembling animals in their appearance but acting like men and women , rose miraculously out of the level plains under which they had been slumbering for countless ages . As these ‘ancestors’ wandered over the countryside they created the topography : the sea coasts , the swamp-lands , the rivers and the mountain ranges and taught men and women the techniques for survival and social rules . They then sank back into their spiritual presence in waterholes and other features of the landscape .
An intimate knowledge of the mythical stories concerning this creation period is transmitted from one generation to the next by means of art , music and drama of Aboriginal ceremonial life . These intricately detailed bark paintings were used to instruct young men in the mythical heritage of their clan and gives guidance to their social and religious life .
The art of painting on bark appears to have been practised in Australia wherever the Aborigines used bark to construct wet weather shelters . However the colourful cross hatched backgrounds as exhibited here belong to the north eastern area of Arnhem Land . The colours are taken from natural pigments obtained locally or by trade , which are ground with a stone . The fixative is the sap from a broken bulb of the tree orchid . Three kinds of brushes are used : a narrow strip of bark , chewed at one end for the broad lines , a thin cylindrical stick for the dots and a flexible brush made from a single small feather for the fine parallel lines and the typical cross hatched backgrounds seen in these two paintings .
The Milingimbi Methodist Mission was established in Arnhem land , northern Australia in the early 20 th century . Between 1926 and 1929 William Lloyd Warner collected the first bark paintings from the mission . Only genuine and authentic works were encouraged as Warner believed this would instil ‘a sense of pride’ in their Aboriginal culture . It was only later after the tireless work of Tony Tuckson , and others such as Dorothy Bennett , that this art form began to be viewed and collected seriously .
There is no artist class in an Aboriginal community , every man can , and will be called upon to act as a tribal artist . The Aborigines of Arnhem Land have limited tools and equipment , simple materials and techniques and follow by western standards an un-progressive ‘stone-age’ way of life , yet their art conforms to the same principles of line , colour and balance of spacing of design elements that characterises the most brilliant and best of modern art . 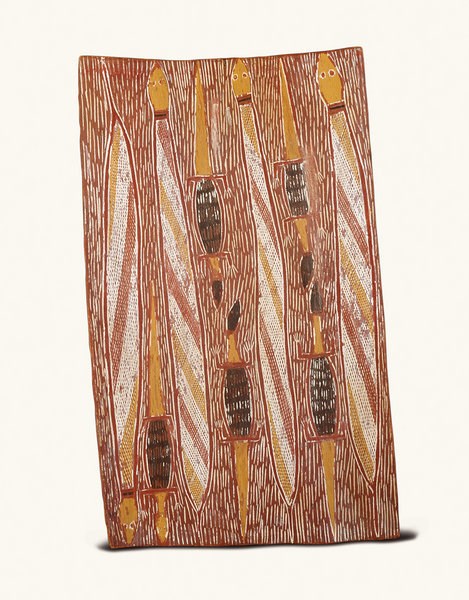