Caption Literature
A Roman Marble Votive Altar Inscribed In Greek Lettering ‘EUCARPIA’ , ‘Good Fruits’
Circa 1 st – 2 nd Century AD
Size : 8 cm high , 16.5 cm dia. – 3¼ ins high , 6½ ins dia.
This ancient marble altar was intended for daily ritual household use upon which sacrificial offerings were made . Roman sacrifices and offerings were carried out according to Greek , Etruscan and Roman ritual . Many sacrifices were part of much larger celebrations and occasions for them in the sacred calendar were numerous . Sacrifice fixed the superiority and the immortality of the Gods , along with the mortal condition and the pious submission of their human partners , at the expense of the animal victims .
Besides animal sacrifice , gifts of cake in specific forms according to the different characters of each divinity were given , and fruit and grains often mixed , and even cooked as specific ritual dishes , were also offered to honour particular Gods . 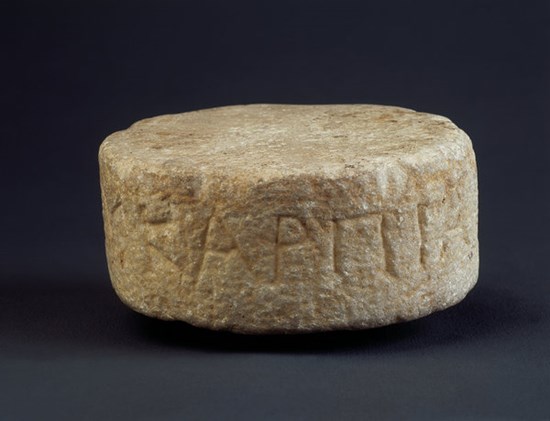